On Wednesday, our fellow trade association, the Domain Name Association (DNA), announced the rollout of its “Healthy Domains Initiative” (HDI).  The ICA joins the DNA in seeking solutions for stopping online abuse.  However, the ICA is particularly concerned  about its proposed remedy to combat online copyright infringement.

The HDI proposes to establish a “Copyright ADRP” with the power to order the transfer of domain names on the basis of claims of copyright infringement.   This proposal would establish a new unregulated private legal dispute system for domain names involving claims of copyright infringement outside of any ICANN-mandated legal rights protection mechanisms (RPMs).  It would also likely slam the door shut on the growing and legitimate practice of licensing and leasing domain names with no trademark issues.  Nevertheless, the .Org registry operator, Public Interest Registry (PIR), has already announced its intent to soon launch its own such “Copyright ADRP” that would award domain names to prevailing copyright claimants.

This is a deeply troubling development as ICANN has up to now been the sole source of all  domain name related RPMs that can result in domain transfer or suspension at gTLDs.  The ICA is concerned that such a development outside of the ICANN multi-stakeholder, community-based consensus model, without public consultation, effectively circumvents ICANN’s established role and obligations, and may lead to private companies electing to force their own private legal regimes on Internet users and domain name registrants.

Unilateral actions, such as those proposed by the DNA and  PIR, should not be undertaken on an ad hoc, commercial basis, outside of the ICANN framework.  ICANN must not abrogate its primary responsibility to provide the policy framework for its contracted parties.

The ICA will be closely examining the HDI and PIR proposals, and will be actively engaged in opposing any unilateral actions which purport to impose private legal systems upon public resources outside of the ICANN community-based framework.

On February 1st the ICA filed its comment letter  with ICANN opposing the inclusion of the URS in the .Mobi renewal registry agreement. Once again we were joined in this position by ICANN’s Business Constituency (BC), and opposed by the Intellectual Property Constituency and the International Trademark Association.

We have seen this movie before. We took the same position on these Global Domain Division (GDD) shenanigans for the 2015 renewals of the legacy .Cat, .Pro, and .Travel domains. When ICANN staff ignored our arguments and went ahead with making policy decisions through closed door contract negotiations we even filed a formal Request for Reconsideration with the Board, as did the BC and the Non-Commercial Users Constituency. We lost on that too.

Those 2015 negotiations took place before the GNSO Council chartered the working group to review all Rights Protection Mechanisms (RPMs) in all gTLDs. As we pointed out in the .Mobi letter:

The 2016 launch of the PDP Review of All Rights Protection Mechanisms in All gTLDs, which is tasked with recommending whether new gTLD RPMs should become Consensus Policy for legacy gTLDs under its GNSO Council-approved Charter, makes it particularly inappropriate for GDD staff to continue seeking that de facto policy result in non-transparent, bilateral RA negotiations that contravene the policymaking process set forth in the Bylaws.

So why does ICA keep beating its head against the ICANN wall in decrying this seamy GDD practice? Because it’s the right thing to do on behalf of our members, and because ICANN needs to be called out every time GDD staff improperly use their superior leverage to push policy decisions through contract negotiations and usurp the role of the community.

And also because the .Net RA is up for renewal in a few months, and whether or not the URS should be available at the number two gTLD is a matter of central import for its 15.2 million domain registrants and should not be decided in a back room. As we gear up to review that proposed .Net RA, we’ll continue to engage in dialogue with other members of the ICANN community who share our concerns, and keep exploring whether there are alternative, more effective means to return policy decisions to that community. We will keep fighting the good fight so long as ICANN staff keeps overstepping their proper bounds.

Howard Neu is well known within the domain industry as the co-founder of the T.R.A.F.F.I.C. conference and a lifelong public servant who has also dabbled in motion pictures and media.

Howard has been an long-term political and legal force, working on many presidential and congressional campaigns. He also produced and hosted a Miami television talk show, “South Florida Speaks” for ten years, a Radio Talk show for three years and was an actor in numerous movies and stage musicals.

He has been a potent civil litigator, one who jumped into the online arena at the outset, defending notable and sometimes notorious clients. END_OF_DOCUMENT_TOKEN_TO_BE_REPLACED

ICA Session at Namescon: The Most Shocking UDRP Decisions of 2016

On Monday, January 23, 2017, at noon, the ICA will be holding a special session at NamesCon, to debate and select the most shocking UDRP decision of 2016. The three cases up for debate are Sihi.com, NutrihealthSystems.com and GreenTrust.com.  Summaries of the cases are set out below.  After the cases are presented and debated, the audience at the session will select the case that deserves the title of “Most Shocking”. 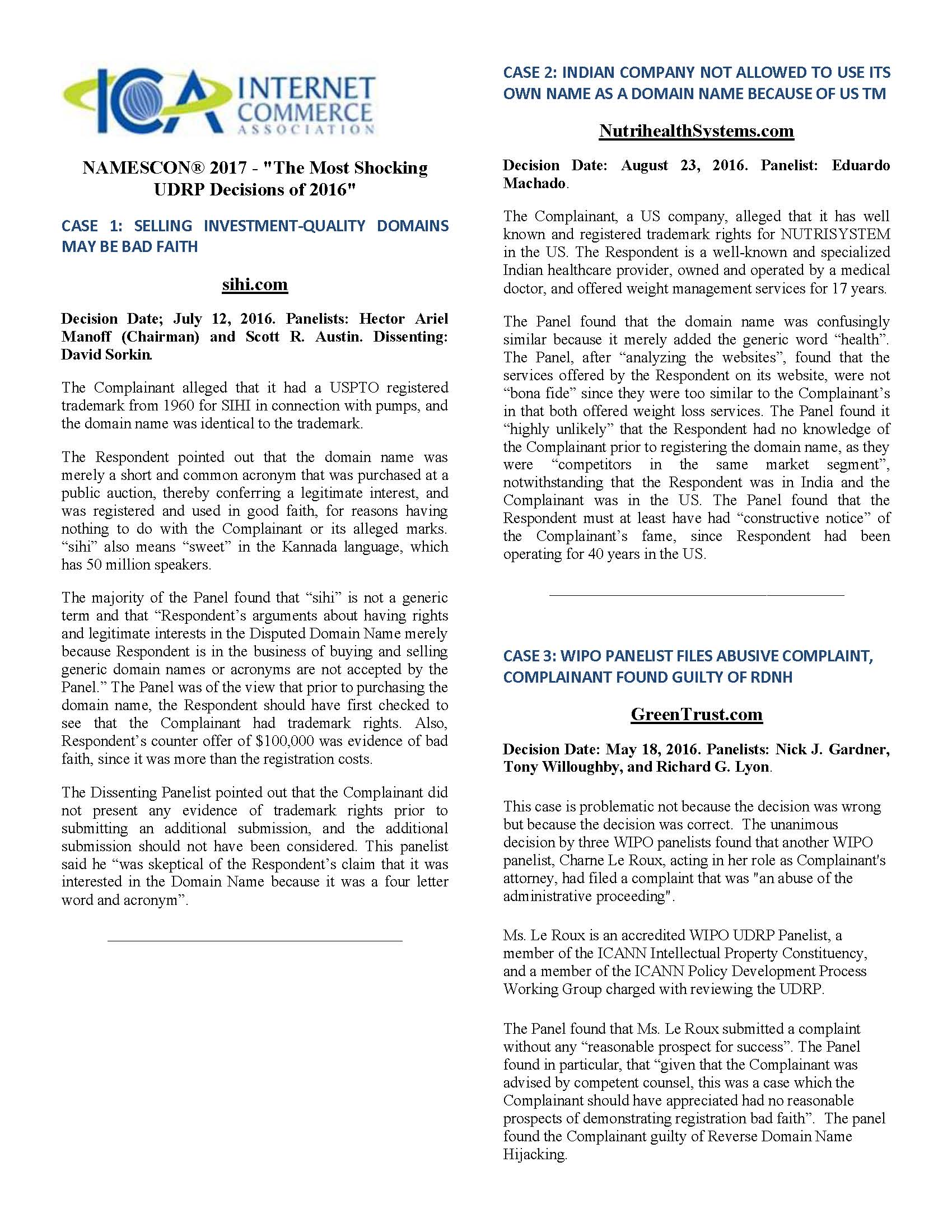 Back in 2007, Mark’s longtime childhood friend from Maryland, John Ferber, convinced him to trade in the four seasons and his suit for eternal summertime and sandals to help launch a new company. Mark, a former shopping center leasing agent, didn’t hesitate at the opportunity to relocate to Delray Beach, Florida. It was there that he learned about digital advertising for a service technology company called USO Networks, spearheaded by Ferber, along with Jason Boshoff and Erik Simons. After a short and successful time in the space, they realized their clients had multiple needs including domain asset divestment and acquisitions. The rest is history. END_OF_DOCUMENT_TOKEN_TO_BE_REPLACED

William Llewellyn is an entrepreneur with a development interest in domains. Through his company Vahlt, he works to acquire and manage key assets for build-out. William also holds business interests in other areas, including sports nutrition and compound testing. He is an accomplished scientist as well, credited with discovering that a particular dietary fatty acid plays a core role in human muscle growth. Though his interests and background are diverse, Internet investment and development have become his primary focus as of late. Several of William’s noteworthy assets include Answering.com, Thinkers.com, and AmsterdamCoffeeShops.com, as well as Inform.org, Anabolic.org, and ConcealedCarry.org. END_OF_DOCUMENT_TOKEN_TO_BE_REPLACED

Most people know Shane Cultra from his blog/website DomainShane.com or DSAD.com, which he’s been writing since 2009 and which now specializes in the domain aftermarket and brings out a daily list of best names for sale each day at all the major auction houses. Shane noticed the domain world back in 1995 but it wasn’t until 2007 when he was in a position to start building his domain portfolio and business. And while he’s been selling domains ever since, he calls his nursery/landscaping business his “regular” job where he’s the 5th generation owner of this family business. Shane puts in full time hours into both businesses and as if he didn’t have enough on his plate, he also competes in Ironman triathlons and marathons! END_OF_DOCUMENT_TOKEN_TO_BE_REPLACED

Joe Uddeme is a self-starter and entrepreneur who launched his first, brick-and-mortar retail business at the age of 17. He successfully started two additional retail businesses and operated all three for a total of 14 years before selling them off and exiting retail completely. He then built and launched a new age media company and helped clients with marketing, branding and web strategy. Eventually, his dear friend John Ferber, offered him a position as a high-end domain broker at Domain Holdings Group. After more than 5 years and 40mm in sales, Joe went on to become an entrepreneur again and launched NameExperts.com in May 2016. END_OF_DOCUMENT_TOKEN_TO_BE_REPLACED

Richard Lau is well known throughout the domain name industry having started many registrars, brokered numerous domain sales and quarterbacked the return of multiple high-value stolen domains. With his co-founding of NamesCon he adds to his successes in the industry, having established NamesCon as the largest commercial domain name conference worldwide. END_OF_DOCUMENT_TOKEN_TO_BE_REPLACED