Early on it looked like concern over the Obama Administration’s proposal to terminate the U.S. counterparty role on the IANA functions contract might be a one-sided partisan affair. That would be very unfortunate, as Internet freedom as well as its security and stability should raise bipartisan questions.

But that is changing. Senator Mark Warner, Democrat of Virginia, last week noted his “serious concerns” and sent a series of pointed questions regarding the NTIA’s announcement to Secretary of Commerce Penny Pritzker. The Dulles airport corridor of Northern Virginia has one of the highest concentrations of technology firms east of Silicon Valley, and the Warner letter may well reflect feedback that his office is receiving from them.

We note in particular that his letter implies that termination of the U.S. role must be accompanied by substantial reforms in ICANN’s fee-based funding as well as greater transparency in ICANN leadership selection, conflicts of interest rules, and policy-making process. All this serves as evidence that any acceptable transition plan will be very complex and that the process might well extend beyond the September 2015 expiration date of the current IANA contract (but, as NTIA and ICANN have both noted, that date is a goal and not a deadline and the contract provides for two two-year extensions at NTIA’s discretion). 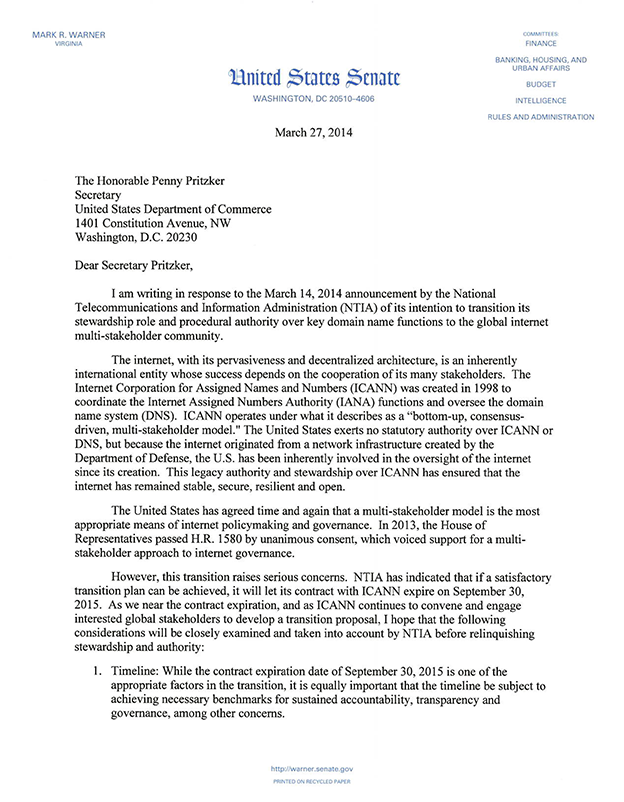